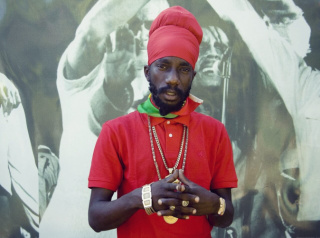 Known for his distinctive vocal and songwriting style of social conscious and at times controversial chants, an ode to the ladies isn't a first, as the international recording star received worldwide adoration from them with hit tracks like "Woman I Need You" and "Dry Cry". "The ladies have always loved Sizzla, I've done lots of female songs but according to them not as much as they'd want. I've never given the world a full ladies album, so this is just the starting of such.This album is somewhat of a lil cross over expressing self yet showing love and appreciation to our women ,for great their stance in our daily lives."

As displayed in the title track MILLION TIMES (now available as instant grat when you pre-order smarturl.it/milliontimes), Sizzla's latest journey fuses various genres and styles yet manages to keep the essence of his renowned falsetto , enticing energy and remarkable delivery. "This album is a different field and vibration, music is life and fun so making this album was a total different experience for me. I like trying out new sounds venturing on new paths while maintaining that loving rootsy lyrical content" he explained. "My fans already know I'm all about making good music so this is just another beautiful album to add to their list of Sizzla's collection. There is no border for love nor music,I'm a roots, ragga , love and cultural artiste so this is another big album with 12 lovely tracks featuring (GMac) on one of the tracks. With my experience in music, matter not the genres , always make sure it's sounding right on key and making sense." - Sizzla