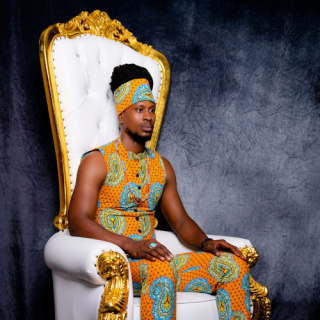 Omari Banks
The Valley, Anguilla, August 06, 2020 /JamaicaPressReleases/ -- As self evident in many of his songs such as "Oh Africa", and "System Set" for example, recording artist Omari Banks hasn't rested only on what Forbes magazine describes as his dashing good looks and rockstar stage presence to gain legions of fans. Although the latter first captures attention, it is his music that really gives an insight into his the mult-award winning guitarist and songwriter. Always embracing his roots, culture and melanin, Omari is.."LIKE A KING".

On Friday, July 17th, 2020 Omari will be celebrating another journey around the sun by releasing in tandem his single and video for "Like A King". Directed by Rickiell Hodge with a concept by Omari Banks, the video which boasts Afro inspired fashions by Donilia Reid (rising Anguilla Designer and Seamstress) was filmed in Anguilla at some beautiful and highly historically relevant places and scenic locations, such as the oldest religious site in the northern hemisphere of the Native Ameridian people.

"The message behind the song "Like a King" is about balance. There are a lot of concepts in today's society on how we should live, I believe we should seek the balance that we were created to live in. As men we should live like a king and treat our women like the Queens that they are..." explained Omari of his song, further adding, "This video meant a lot to me for many reason, such as both of my daughters Somaiya and Ashe' who play significant roles with in the video to tell the story of the video. An Ancient truth."

"Like A King" single will be available on all major platforms via ONErpm, while the video will premiere on Omari Banks official YouTube channel. https://ps.onerpm.com/ob-king

Although 2020 has changed the landscape of the music arena, Omari has been hard at work behind the scenes working on new music for his next album, and also an upcoming release in partnership with Indian based music label IncSync Music. Omari who in 2018 premiered his “Reggae Summertime” video, received a warm welcome from the press, new fans and of course hardcore cricket lovers! Categories: Entertainment