The Lambsbread PASS ME THE FIRE | Jamaica Press Releases and News 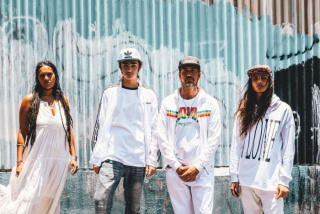 The Lambsbread
Hawaii, USA, December 18, 2019 /JamaicaPressReleases/ -- They've championed for World Peace Before 2021, Felt the Vibes with GRAMMY winning royalty Morgan Heritage and declared that the World Needs Love, now armed with powerful lyrics, The Lambsbread urges to "Pass Me The Fire" !

Give me the fire, make it blaze
brainwash society a put dem inna haze
got to find a way out of the maze, dem haffi change dem ways
good vibrations raise, so let’s give thanks and praise
you know the fire haffi light
come make we blaze it up and hold a vibes tonight
everybody feeling alright, no negative vibes
people say rise, just look dem in the eyes and say

Unofficial ambassadors for love, peace, equality and justice for all mankind, Hawaiian based reggae band The Lambsbread which comprises of vocalists Kaya and Nadia, their sons 19 years old Samuel Levi (drums), 15 years old Jacob Selassie (keyboard) and viral sensation, 5 years old Ikaika, use word sound and power to leave a meaningful legacy. Their latest release “Pass Me The Fire” written and produced by Jacob Selassie is a roots and reggae social commentary tale as old as time. "The song is about how the brainwashing system tries to keep the people in slavery with the mentality that they are promoting, but they will not last as the people evolve spiritually. Basically Good over evil everytime!" explains Kaya Lambsbread.

A family affair, the track which boasts the vocals of Kaya and Nadia Lambsbread and produced by Jacob Selassie, features veteran reggae musician Chris Meredith on bass (Bass Player for Stephen & Ziggy Marley), Jesus "Chewy" Gallegos on Guitar and was mixed by Samuel Levi. Distributed by Zojak Worldwide, "Pass The Fire" (smarturl.it/PassMeTheFire) is the first single off their forthcoming sixth full-length album, set to release spring of 2020. Categories: Entertainment