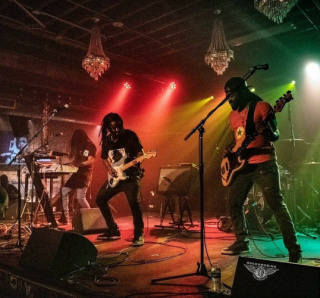 EarthKry
Kingston, Jamaica, December 02, 2019 /JamaicaPressReleases/ -- Jamaica's homegrown Roots Rock Reggae band EarthKry comprising of Keyboard player Phillip Mcfarlane, drummer Kieron Cunningham, bass guitarist Kamardo Blake and vocalist/guitarist Aldayne Haughton are slated to end 2019 with the release of a new single and video for "BITTER ROSE", and the announcement of their next album, slated for release in the early part of 2020 with a supporting tour.

Fans of EarthKry have been anxiously anticipating for new music from the quartet reggae ensemble. The single (available as a pre-order http://smarturl.it/ek-bitterrose) BITTER ROSE paired with the video, tells a precautionary tale of karma. "Careful how you throw your stones, it will bounce right back and knock you down" says the chorus. Recorded and filmed amid their touring, BITTER ROSE will be released on November 15th, 2019 by Zojak WorldWide.

"We know that fans have been asking for new music, but in the same manner that it takes time to make and raise a child, for the past 3 years we have been busy raising our album SURVIVAL around the world. Music is our baby, and we are now ready for another one. Although BITTER ROSE won't be on the upcoming album, it's a preview of what is to come" - explained EarthKry keyboardist, Phillip Mcfarlane.

Vocalist and guitarist Aldayne Haughton added "Our music like our children, it is our legacy, so it is something we take pride in not rushing"

Arguably one of Jamaica's most touring self-contained band of their generation, EarthKry spend the last few years touring worldwide non-stop both on their own merits Europe (Switzerland, France, UK, Spain, Portugal, Poland, Italy, Netherlands), and the continental USA, and by joining two-times Grammy nominated J Boog on his "Rose Petal Tour 2019", and with New Zealand's top billboard charting Katchafire in Australia (2018) and USA (2019).

Influenced by Bob Marley and The Wailers, Peter Tosh, Jacob Miller, Black Uhuru and Steel Pulse, the Edna Manley College alumni will be releasing their much anticipated sophomore album March 2020, and embark on an intercontinental voyage (Africa, Europe, Caribbean, USA) to deliver as their name EarthKry signifies, their mission to voice the grievances of the downtrodden through the vibrations of their legacy music. Categories: Entertainment